When Martha Ramos climbed her first cellular tower, it wasn’t so much being up high that made her nervous, it was learning to let go.

“If you’re working on equipment on a tower, you have to have both of your hands free,” said Ramos, a tower climber for DISH. “You hook yourself to a tower with a piece of equipment called a grillon and it holds you so you can let go of that tower. It took me about a month to get used to and trust the equipment I was using not to let me fall.”

Ramos said she no longer gets nervous climbing towers, which comes as no surprise for a woman who doesn’t shy away from challenges. She is DISH’s very first tower climber.

Ramos didn’t grow up dreaming of scaling towers for a living, but she was always interested in building things and working with her hands, which is probably why she ended up working in the construction industry early in her career, putting up steel buildings and taking on other traditionally male-dominated trades.

“I could never sit behind a desk or work in an office,” said Ramos in an interview with WIA. “I have to be out in the world doing whatever I can get my hands on.”

In 2012, Ramos joined DISH in its residential division and then transitioned to management for a couple of years. She then began working as a commercial technician, setting up satellite TV service for large buildings. In 2018, she heard rumblings about a new tower climber program that DISH was getting ready to launch in support of its narrowband IoT network buildout. She was intrigued.

Always curious and interested in trying new things, Ramos said she began making phone calls and doing research to find out what being a tower climber was all about.

“When I first started this venture, I really didn’t know what I was getting myself into, but I knew this was the way DISH was going. This was the future and I wanted to move with the company,” said Ramos. “So, I applied, went through the interview process and then they hired me. I still didn’t know what to expect, but I got my answers the day I stepped into training.”

Ramos — who is not only DISH’s first female tower climber, but also the company’s first wireless tower climber ever — said she found herself looking up a 300-foot, self-supporting tower on her first day of training.

“I kind of looked at it and I was like, ‘What are we supposed to do with this?’”

A rigorous three-week training program not only taught her and DISH’s first tower climbing class in January 2019 how to climb that tower, but also how to work with safety equipment and service network hardware.

In the field, Ramos and her crew do a variety of work that takes them around the country, including building towers, attaching radios and antennas that are flown to the top of towers, and troubleshooting cables, fiber, power, antennas and other equipment. DISH currently employs more than 100 tower climbers and plans to continue to hire and train climbers. DISH says it will need partners to achieve its aggressive 5G buildout timeline, and its in-house tower workforce will complement and supplement those third-party partners.

Most of the towers Ramos and her crew have worked on range from 250 feet to 350 feet, although her highest and most memorable climb took her to the top of a 492-foot tower in Oklahoma.

“The views were just absolutely amazing,” said Ramos, who noted her phone is full of photos she’s taken from the tops of towers. “It was a challenging climb for me, but once I got up there, it was exhilarating. I’m fascinated by how beautiful it is, and not everybody gets the opportunity to see the things we get to see. Sometimes you just have to sit back in your harness and take a look.”

Although DISH now employs three female tower climbers, Ramos said she has never run into another woman on a tower site. She has found that while some of the men she has worked with will later admit they were initially skeptical about her ability to climb towers, she generally feels like she is treated like one of the guys.

“I don’t think that I have to prove anything to anybody,” said Ramos, whose title is Wireless Tower Technician. “Just the fact that I’m standing here on site with them after the extensive training DISH put us through should be a clear indication that I’m able to do this job. Generally, when we are ready to climb, I suit up and I don’t shy away from it, and I think that right there tells the guys on site, ‘Hey she’s OK.’ I haven’t had any issues with any of the guys out on sites treating me any differently. If anything, they come up and shake my hand and tell me that I’m a badass because they don’t ever see women in this field.”

Now a year into her job as a tower climber, Ramos says she’s glad she took the chance.

“To me, it’s an elite job,” said Ramos. “You see cellphone towers everywhere, but people don’t realize — I didn’t realize — there are people on them. Now when I look at towers, I look to see if I can see anybody hanging off of them.”

“It’s definitely a very challenging but rewarding job, and anybody in the field — man or woman — should be proud that they can actually do it.” 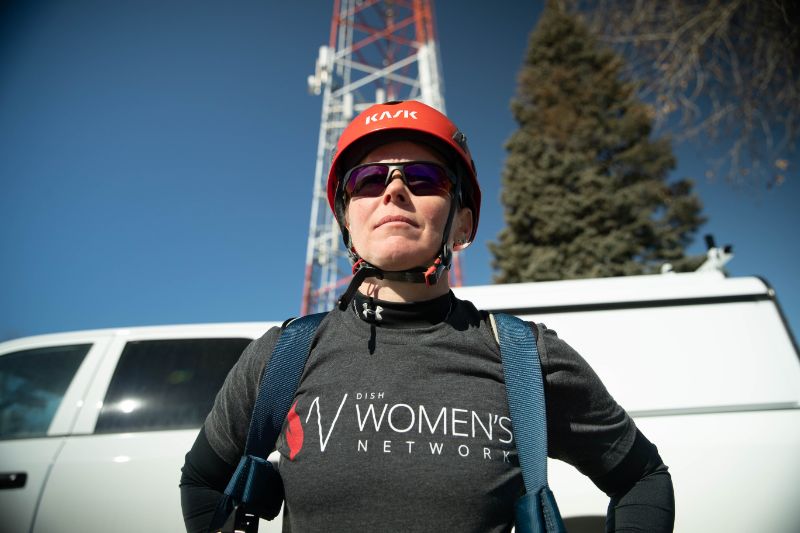